Recently my dog Simon and I had a bit of a clash with our neighbors. Apparently, these neighbors were deathly afraid of dogs but instead of notifying the people around them who owned dogs, they notified the apartment complex office. Since there were no resident names attached to the complaint, the office just let the information sit instead of sharing it with the other residents. 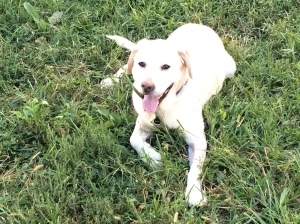 Unfortunately, Simon, my 14-year old yellow lab, is a very friendly dog and says hello to everyone, and on this particular day…he said hello to the wrong neighbors. The woman began screaming and her husband began shoving Simon away and chasing him (who knows to what destination) until I finally got them to stop yelling and had calmed Simon down enough so that he wouldn’t run away anymore and instead just sat still.

I was shocked. I’d been living in the complex for 4 months now, had seen these people on a regular basis, and had no idea that they were so terrified of dogs. Initially I was angry because Simon was a rescue and we believe he had been hit by his former owner because he flinches when you raise your arm too high or too quickly. However, I realized that every party involved was at fault here. This is why I decided to write this post for animal owners, animal fear-ers, and apartment management teams.